The Požarevac Morava district (Požarevačka Morava, Požarevačko Pomoravlje) gets its name from the city of Požarevac, found at the lower end of the Morava river valley, near the Danube. The city arose on the ruins of the Roman city of Margus, best known as the site of a treaty between the Byzantine Emperor Theodosius and the Huns, led by the brotherly duo of Attila and Bleda. It was part of the medieval Serbian kingdom of King Dragutin Nemanjić, until its Ottoman conquest in 1459. Apparently destined to be a place of peacemaking, it was also the site of the signing of the Treaty of Passarowitz (because, Austrians mangle every single Serbian town name they attempt to pronounce) which led to a short-lived peace between the Ottomans and their two western adversaries, the Austrian Empire and Venetian republic. 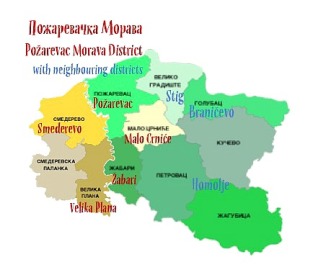 Požarevac is now part of the Braničevo administrative district (okrug), but this district covers three microregions: Braničevo, Stig and Pomoravlje. The lattermost is defined by the Morava river to the west, the Mlava river to the east, Danube to the north, and the plains just north of the Resava river to the south, toward the town of Svilajnac. The region is mainly flat but becomes hilly towards Resava and Mlava rivers. The western boundary isn’t a definite one when it comes to material culture; similar costumes were once worn in villages along the western bank of the Morava, as well.

Being centred around the Morava valley meant that the Požarevac Morava area was a vital route for trade, migration and conquest. The Turks reached and took nearby Smederevo, medieval capital of the Brankovic despots, in 1459; Pozarevac is first mentioned as the fiefdom of a Turkish Beg in 1467. When the Austro-Turkish conflict at the second Battle of Kosovo led to a defeat for the Austrians, Serbs (who fought for the Austrians) were subject to harsh reprisals at the hands of the Ottoman Turks. Led by their Patriarch Arsenije Čarnojević, an estimated 37,000 Serbian families (just under 200,000 people!)  migrated north in what has come to be known as the Velika Seoba – the Great Migration. Požarevac Morava residents fled with them, while some of the migrants themselves stayed locally. Eventually, the migration reached Szentendre, Hungary, a Serbian enclave to this day. Of the several churches in that town, one is in fact known as the Požarevačka Crkva – Pozarevac Church, constructed through the efforts of migrants from this area.

Further migrations bolstered population of the district. Anthropologists and historians identify up to eight major migrational waves or “currents” (migracione struje) for the establishment of the population of Pozarevac Morava area: from Timok region, from Kosovo, the Vlach wave (from Homolje and Resava, mainly), the Šop wave (Knjazevac, Pirot and Trn), the later Dinaric wave (Metohija, Montenegro, Hercegovina), the Vardar-Morava wave (Skoplje region, Vlasina, Leskovac), as well as minor waves within and between microregions.

The many migrations left several marks on the inhabitants. One is most certainly the local dialect, called Kosovo-Resava dialect (Kosovsko-Resavski dijalekat). Spoken from Metohija in the south, along Ibar, Western Morava and Great Morava rivers, to as far north as pockets of eastern Banat, this dialect has a lot of internal variation but can be distinguished by a few features that stand out. One is the number of noun cases (padeži): in most areas all seven cases are kept, but in a few only five are used – instrumental and locative are lost (i.e. idem sa sestrom becomes idem sas sestru; idem vozom = idem s voz). The dialect is strictly ekavian (the vowel e is unaltered = lepo belo mleko!), lacks the phoneme H (Thus, leb, rana, ajduk instead of hleb, hrana, hajduk), uses the archaic phoneme dz (Producing dzvono, dzvezda instead of zvono, zvezda), and shifts accents (i.e. covEk, instead of čOvek; dvanAest instead of dvAnaest; bunAr instead of bUnar). In terms of material culture, there are similarities to Kosovo and South Morava in traditional building of houses and in pottery, but especially in the colours, materials and ornamentation of women’s costume.

This complex history of migrations, combined with the region’s proximity to the Danube and northern Serbian regions, has come to create a folk costume that shows both central Balkan and Pannonian elements. In fact, ethnographers currently tend to classify Šumadija, northern Pomoravlje, and Mačva among the Pannonian ethnocultural zone. This contact with the Pannonian zone to the north and with Šumadija region to the west has led to a huge transformation in local costume. The nineteenth century costume presented here has been supplanted by a costume virtually indistinguishable from Šumadija and upper Pomoravlje. 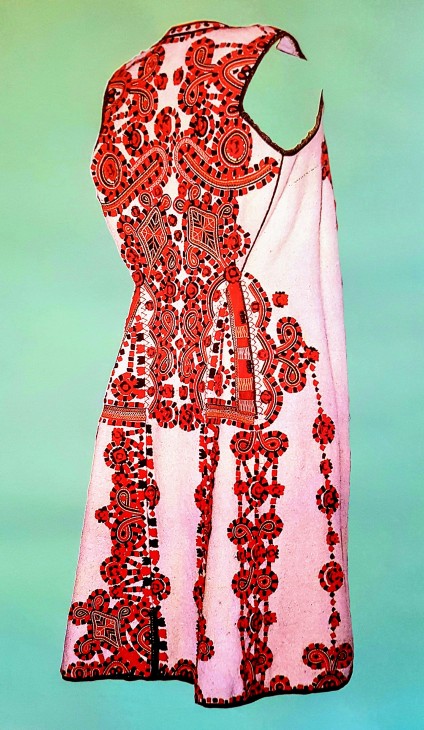 The main materials for both the men’s and women’s costume of Požarevac Morava are similar to those of other village costumes: hemp and linen, later cotton, for most garments; woven and rolled wool cloth (čoja, klašnja) for outer garments. In the women’s costume, the older long shirt (košulja, rubina) has in some cases been supplanted by a short shirt (oplećak, oždrelj) and skirt (suknja, krila).  The parts of the women’s costume of this region are:

Of these costume elements, the košulja and zubun represent the most ancient Slavic costume elements. The pregača shows hallmarks of transitional zone costume: the technique of weaving with horizontal stripes is of central Balkan origin, but the embroidery is a Pannonian influence. The suknja has its origins in the double apron costumes of the central Balkans, but eventually evolved into the bell shaped or pleated skirts worn in the 20th century.

The most outstanding element of the costume is, without a doubt, the zubun. It represents the height of creative and artistic expression in the textile culture of the Požarevac Morava. It was made of rolled wool cloth (čoja, klašnja) and decorated with wool braid (vuneni gajtan), wool thread embroidery, and a seemingly infinite number of čoja cloth squares arranged in stunning patterns and sewn on individually. The colours of this applique ornamentation are limited, with red, black, brown, deep blue, and dark green predominant. This palette ties the Požarevac Morava zubun to those worn in Methohija and Kosovo, and likely originated among those 17th century migrants arriving in the more northern lands. Similar zubuni (pl.) were found in other areas of Serbia: Aleksandrovac, Kruševac (both western Morava), Svilajnac (Resava district). Like the Požarevac Morava, the zubun fell out of use after the First World War in these districts, supplanted by a very homogenized Morava zone costume.

Other than braid and applique, zubun ornaments could include tassels (kićanke), fringes (rese) and a subtle, limited use of metal threads (srma). The zubun was sewn from rectangular and triangular pieces of cloth (pole and klinovi, respectively), generally had no collar (if present, it was a low ornamental one), and virtually never had pockets. Zubuni were most often produced at home, by the women of a family themselves, but could also be made by abadžija craftsmen. Sometimes a combination of these would happen: the craftsman sewing and decorating with braid, the women finishing off the decoration with cloth applique and embroidery. Embroidery techniques were simple, most often prepletanac (stem stitch), lančasti bod (chain stitch), puni bod (satin or full stitch), kosi bod (diagonal stitch). The renowned costume archivist and illustrator, Olga Benson, made meticulous drawings of zubuni from all over former Yugoslavia, with simple sketches of their pattern, too.

Similar types of zubun were worn south and east of Požarevac Morava, in the Resava and Timok regions, by both Serbian and Vlach women. The difference between these was that the Serbian zubun generally had much more ornamentation than those of Vlach women. The techniques of ornamentation were essentially the same.

The ornaments themselves were stylized and geometric: hooks and spirals, representing flowers, vines, feathers, the sun and even eyes. (the lattermost would protect the wearer from the evil eye, zle oči or urokljive oči). Regional variations could identify which village a woman was from, with a single glance. The names of some of the patterns included kolo (circle), kuka (hook), vrčka (spiral),  loza (vine), trolist (trefoil), Kosovski božur (Kosovo peony), đulići (rosebuds), sunčevo kolo (sun circle), budno oko (awake eye), etc.

I am fortunate to have two zubuni in my collection. Both were acquired from collectors in Požarevac, but they originate from villages nearby, Šljivovac and Toponica.  They are both made from similar white wool čoja, with applique of coloured čoja, each in its own unique patterns. Both zubuni date to the late nineteenth century, roughly 1870.

The Šljivovac zubun has bright red coloured applique, with black, green and yellow wool cloth as well. The back of the zubun is riotous  in colour and design. It has been completed with a gathered sleeve košulja sewn from srpsko platno (“Serbian Cloth”, a linen with stripes woven into it) and an apron which is typical of the region, having orange, green and black stripes and simple embroidered designs. The pojas or sash is of coarse wool, in a square motif typical of this region and Resava region. The head covering is a simple, plain cotton kerchief worn over a coiled wool kondža.

The second zubun I have originates from Toponica village, south of Požarevac. It is the older of the two, and has some damage due to moths, mainly on the off-white čoja cloth. The colours are deeper – maroon red, green, black, yellow predominate – and the design is more restrained yet still opulent. It has the very uncommon feature of having pocket slits on its front panels. I have completed this costume with a košulja and embroidered skirt, an apron embroidered more richly in floral motifs, and a satin kerchief worn over the kondža.

The Požarevac Morava costume has changed drastically over the past two centuries. Much of what was once worn persisted somewhat longer in the Timok region, mainly due to that region’s remoteness and isolation…. something for a future post! 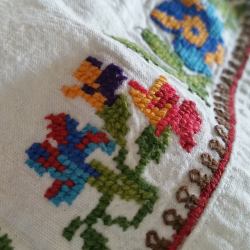 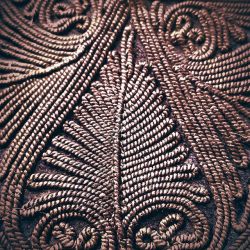 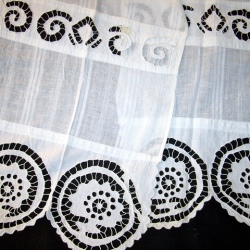 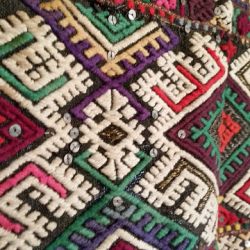 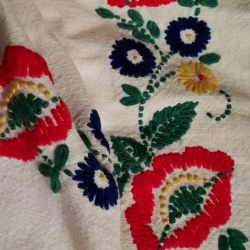